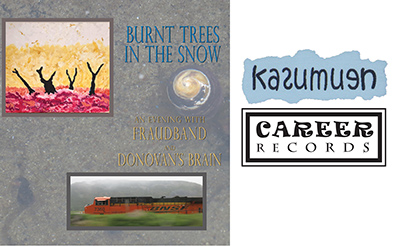 Burnt Trees In The Snow, a new joint release by Fraudband via Kasumuen (Oz) and Donovan’s Brain via Career Records (US) is now available for pre-order.

This ten song split album features one side apiece, five songs from each band.

Order from the Career Records Shop

or for Australian and Asian customers…