“Res Ipsa Loquitor” is the first full fledged Angie Pepper album to hit the racks and is on the new label Career Records, the imprint co-owned by Donovan’s Brain leader Ron Sanchez and Deniz Tek. “Res Ipsa Loquitor” compiles tracks recorded by Angie in American sessions with Australian and US based members of the Deniz Tek Group, producer and David Weyer.

Four tracks were the upshot of a collaboration with Montana psychedelic collective Donovan’s Brain.

There is also a cover of Sydney’s infamous Lipstick Killers’ “Hindu Gods of Love”. The Deniz Tek produced original 45 rpm appeared on the Bomp/Voxx label in 1980.

The resulting album is a unique cross between “Pet Sounds”-era Beach Boys,60’s girl pop like the Crystals and the Shangri-Las, and the contemporary pop-rock sounds of Garbage. The album sounds remarkably coherent, despite the variety of players. Most songs were penned by Deniz Tek and Angie Pepper. Highlights include the Brian Wilson-like “Cool Sea”, the poppy “Baby Don’t Go”, the obscure Link Way cover, “Trying to Find Your Love” and a Diane Renay tune, “Kiss Me Sailor”.

Angie Pepper first came to notice as vocalist for the post punk independent Sydney band the Passengers, who produced one single (“Face With No Name”) on the Phantom label. She married Radio Birdman co-founder Deniz Tek, and they played together in the short lived Angie Pepper Band whose ranks included a future Hoodoo Guru in Clyde Bramley and a former Saints drummer in Ivor Hay.

Re-mixed demos recorded by the Passengers and studio tracks recorded with the Angie Pepper Band were released in 2001 on Sydney’s Citadel Records as the retrospective compilation “It’s Just That I Miss You”.

Rough mixes of the Passengers material as well as studio tracks recorded by Angie and Deniz in Houston were briefly available through tiny French label Revenge.

“Res Ipsa Loquitor” will be Angie Pepper’s first album of newly recorded material in years, and signals a powerful renaissance for this great singer, described by Aretha Franklin’s producer Arif Mardin as having a “most special voice”. 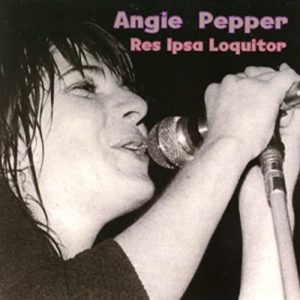