Are you ready for a dose of the hard stuff? Deniz Tek, Scott Morgan and the “Three Assassins” deliver a hit of unadulterated, 200 proof old school Motor City rock. Not for the weak, this stuff burns as it goes down.

One of the aspiring rockers in the audience digging a Rationals’ gig at Ann Arbor’s Forsythe Junior High was future Radio Birdman leader Deniz Tek. Deniz’s first impressions match his quote of today: “Scott Morgan is one of the greatest singers in the world, a unique soul shouter from the old school, and an amazing guitarist”. The Rationals along with the MC5 were the house bands at the Grande Ballroom, supporting and holding their own with Hendrix, Cream and many more. The Rationals were local legends, whose regional hit single with Otis Redding’s “Respect” inspired Aretha Franklin’s classic version recorded shortly after.

In 1973 Scott teamed up with Fred “Sonic” Smith from the MC5 in another legendary outfit, Sonic’s Rendezvous Band. Deniz Tek had meanwhile gone to Australia and Radio Birdman. On trips home he hung out and sat in on guitar with Sonic’s Rendezvous many times. Deniz now found himself exchanging ideas with the musicians who had influenced him as a teenager.

Since Wayne Kramer and Deniz asked Scott to join them in Dodge Main, the Tek/Morgan partnership has taken many forms, including Deniz’ own live solo work, a national US tour in Scott Morgan’s Powertrane with Stooge Ron Asheton, and a Sonic’s Rendezvous reunion tribute where Deniz filled in for Fred Smith.

The third generation of this triumvirate comes from Rome, in the form of the back line of The Sonic Assassins. There is little doubt the brothers Pasquini and Stefano Costantini knew exactly they were getting into when Deniz Tek asked them to back him on a tour. During their decade in A-10, described by some as “the most brutal punk rock band in existence”, they had toured extensively with The Deniz Tek Group’s “Outside” lineup. Deniz chose to turn the intensity up even more, and invited Scott Morgan to come along for a tour of France and Italy, rounding out the three guitar line up.

The set for the tour and the resulting album draws from both Deniz and Scott’s past work, as well as that of fellow Michigan bands The MC5 and Stooges. The album’s opening blast of Future Now, from the MC5’s final album, transforms the song into a driving blues shouter. Electrophonic Tonic finds the band picking up speed on this flashback to Scott’s R&B roots. Blood From A Stone and Give It Up originally appeared on Outside, considered by many to be the best solo release from the Iceman. Shellback and Agua Caliente from the Equinox album take on new life with the A-10 rhythm section in charge.

From the song book of Scott’s European band the Hydromatics comes Runaway Slaves. Drummer Pippo Pasquini finds the back beat and doesn’t let up. Romano and Pippo Pasquini drive the band with a youthful power and understanding of the music in the same manner the Godoy Twins fuel the Golden Breed with Deniz. Scott brings Asteroid-B612, Heaven, Love And Learn, and Dangerous from Sonic’s Rendezvous Band. The three guitar mauling of City Slang and white hot versions of I Got A Right and TV Eye bring these killer jams to a crashing end.

Deniz Tek and Scott Morgan, two un-stoppable veteran road warriors, have once again joined forces with a new generation of hard rockers to bring you this destroyer set of essential Motor City rock and roll. 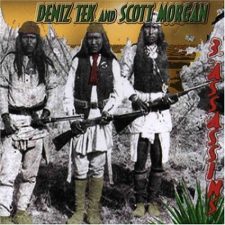