When Art and Steve Godoy teamed up with Deniz Tek, their first objective was to perform some of the more obscure Radio Birdman songs live. Many of these numbers had never been played after they were originally recorded. The ten songs on “Glass Eye World” sprang from this musical exercise. The young musicians drive and sheer enthusiasm have allowed Deniz approach this album with few boundaries.

The song writing credits are shared equally with most of the songs being three way collaborations. “Let’s Go” is probably the oldest song on the album coming from Art and Steve’s band the Exploding Fuck Dolls song book. Not afraid to blend influences, the vocals have the fire of the Clash while the massed hand claps are a nod to glitter rock faves, Slade. “What It’s For” was recorded at the first sessions held in Billings. Deniz thought enough of the song to take it to Radio Birdman who have cut a version and have added it to their current stage show. “2 Pam Chloride” (a title that some chemists may recognize) is another complex production, receiving additional harmonies and a touch of organ. The band are captured performing in front of an invited audience made up of friends of Deniz’ daughter. The rural setting of Dave Weyer’s Studio would surprise some, but offers the musicians a view of the Yellowstone Valley and plenty of fresh air. “Baja Confidential” is an unexpected surf instrumental that reminds one of Quicksilver Messenger Service, another early influence on Deniz.

The second session for the album found the band playing with more confidence and a wider musical palette. “Flight 19” retells the story of the Navy Squadron lost in the Bermuda Triangle. Deniz’ time spent as a Navy pilot gives him plenty of insight into the perils of flying. The two stage guitar solo gives Den a chance to show off his extraordinary skills. As the only soloist in this band, he’s allowed to take several long guitar rides. Clifford Possum is another musical short story, telling of the life of one of the most influential contemporary Australian painters. The wide screen imagery created with words and music are a fitting tribute to the late artist. The source for the title is the group composition “One Eyed Sam” is about a man who lives in a “glass eye world”. This one carries a distinct flavor of Art and Steve’s Southern California punk rock roots.

“Out Of Action” and “Always Out Of Reach” were recorded in Vancouver after a successful gig in Art’s current home town. Once again the band has gone from strength to strength. The twin’s contribution “Out Of Action” finds them roaring through three minutes of molten fury. Ironically, due to the hectic schedule no one in the band had given much thought to the tracks once the recording was completed. It was six months before the tapes were shipped to GLEA, where the final mixes were being prepared, that it became very clear that these two tracks were the final and crucial piece of the puzzle. Deniz’ “Always out Of Reach” may be one of his best composition since 1978. Radio Birdman has recently demoed this one as well, but they’ll have to go a long way to top the Golden Breed’s version.

“Glass Eye World” is the first album of new original material that Deniz has released in more than two years. The unbounded enthusiasm of Art and Steve Godoy and the luxury of recording an album free of any commercial compromise is cause for celebration. 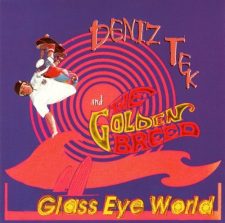