The completion of the new Donovan’s Brain coincided with the news that our long time
co-conspirator Richard Treece had passed away at his London home on May 26th, 2015.

Ron Sanchez and Richard Treece were first introduced in 1978. In the early 90s Nigel Cross suggested to Ron that he reconnect and see what assistance he could offer to Richard and his band then known as the Archers. When Donovan’s Brain MK2 collapsed, Richard and Ron hatched a plan to salvage the tracks recored for Eclipse And Debris. The results encouraged them to continue to collaboration over the next three albums.

An appearence at the Seattle Terrastock Festival was a highlight of this effort. Richard also played on several tracks which appeared on various compilations. Most recently Richard was heard on the Donovan’s Brain – Nomads split EP No Cops Haul Ass. 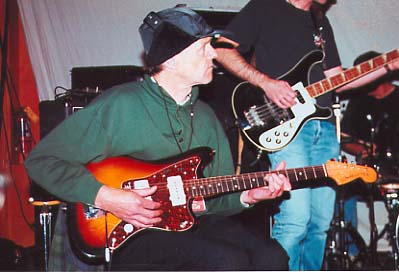