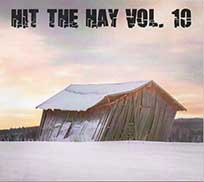 Coming in the next few weeks is Hit The Hay Vol 10, a colleciton of Power Pop bands on the Swedish Sound Asleep label. We put together a new song, The Best Mistake for this release. A few weeks ago Tom Dyer at Green Monkey asked if we could contribute to a Christmas Holiday charity compilation. I suggested we finish up one of the new songs Two Old Cats. Kris Hughes offered to rewrite the lyircs and sing it. The new song is called Gray Whiskers (Winter Cats). The song was mixed as soon as Bobby Sutliff’s guitar solo was added. More news about this as soon as known.

The third release is a collection of Montana bands from the 70s and 80s on the Lost Sounds label run by Dave Martens. This is the follow up to the 60s collection Long Time Coming. This new release is the companion to a documentary filmed by Kirk Leclaire. Donovan’s Brain fall into this time frame, though most of our recordings are from the 90s. Band members Ron Sanchez, Kels Koch and Jim Kehoe were interviewed for the film. Don’t Thank Me from Tiny Crustacean Light Show will be remixed for this release. A remixed, remodeled release of Tiny Crust is penciled in on the Career release schedule for 2020. Work on that will continue as time allows. A new album is the primary focus right now.