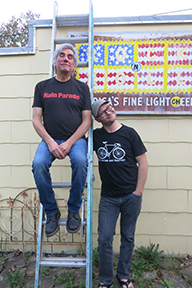 Deniz Tek’s new album titled Mean Old Twister is set for release at the end of August. The album is at the pressing plant and the cover design completed. The twelve new originals pick up where Detroit left off. A couple of new musical textures are added to keep things moving forward. The album will be available on CD and vinyl. Citadel will release the CD in Australia.

Meanwhile, Donovan’s Brain member Tony Miller made a brief appearence in Bozeman. Tony was travelling for work and had the chance to see much of Western Montana. Drinks and dinner were had. Tony had a listen to a new song which has been under construction, Ministry Of False Alarms. He suggested a vocal part he could add. The track has been sent to Color Wheel for overdubs.

Work on the next Donovan’s Brain album of new material will continue while the second archive project moves to the head of the line. This double disc set will cover the period 1995 to 2015 and feature Richard Treece. The GLEA vault holds several hours of unreleased songs and performances. This set will also round up several compilation tracks. A full track listing will appear in the near future.