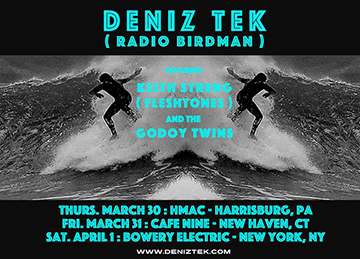 Deniz Tek will be doing three East Coast dates at the end of the month before heading to Spain. The band has expanded to include Keith Streng on guitar. Ron Sanchez from the Career House Band and Donovan’s Brain will be sitting in with the new Deniz Tek Group for the New Haven and New York City Shows. This is a rare outing for this line up.

Ssessions for Deniz’s next two albums will begin in August in Bozeman. Meanwhile work on the new Donovan’s Brain record is continuing. Ex-Winkies lead singer Philip Rambow has agreed to lend a band. Ric Parnell will be returning to GLEA in April for drum sessions and Bobby Sutliff has penciled in aa visit for later this year.