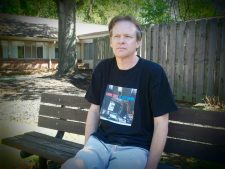 Bobby Sutliff passed away on Monday evening, August 29th. He had been moved to hospice just two weeks after being diagnosed with stage four kidney cancer.

We are all in a state of shock about this unexpected news. Funeral services will be held on Saturday the 10th in Delaware, OH.

Bobby was known for his work with the Mississippi band The Windbreakers. He later had a successful solo career. Bobby joined the ranks of Donovan’s Brain in 2005, first appearing on A Defeat Of Echoes. After helping on Roy Loney’s Shake It Or Leave It album he became a full time member of Donovan’s Brain. He has appeared on every release since. He will also be heard on the next Brain album, Faith In Failure which is due in early 2023. The solo album he had been working on my eventually see the light of day.

A Go Fund Me Page has been created to raise fund to assist Bobby’s wife Wendy: Give Bobby A Hand